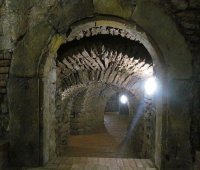 Český Brod is an ancient Gothic city, which is why it also boasts an underground area. However, we still do not know very much about the origins of these underground corridors (vaults). The vaults could have had a number of possible functions, such as to conceal valuables and money, or to store salt, food, wine, or other agricultural products. After the great boom of beer brewing in the 14th century, the cellars were used to store beer and the ingredients used for brewing beer. The vaults could also have functioned as a shelter for residents in times of danger. The corridors and cellars in the historic heart of the city have survived to this day; however some have been walled-up, and have even caved-in in some places. Beginning in 1993, a small portion of the corridors have been made accessible, with the entrance at No. 1 on Arnošt z Pardubic Square (tours must be scheduled with the city Information Centre at Arnošt z Pardubic Square No. 56)

Virtual tour of the underground (available for wedding ceremonies)

The former Romanesque church from around 1135 was rebuilt as a three-nave Gothic church in the first half of the 14th century. In 1421, it was significantly damaged, and in 1613-1614 was repaired in the Renaissance style. In 1765-1772, the church underwent yet another transformation, this time in the Baroque style, designed by Prague architect J. J. Wirch. The main altar of the church is Rococo, designed by I.F. Platzer, from 1781.

The freestanding Renaissance belfry, built in1578-1585 by local master mason Pavel towers in the northeastern corner of the now-defunct cemetery at the Church of St. Gotthard. The belfry is a substantial, 40-metre high, two-storey square tower built from sandstone blocks. The individual floors of the belfry are accessible on the south side via a winding staircase. Hanging in the belfry is the bell named "Marie," from 1689, which is 70 cm tall, and weighs 650 kg. It is currently not accessible. 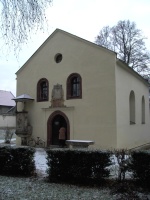 Church of the Holy Trinity

The Evangelical Church of Czech Brethren, dating back to 1560-1562, is situated in the City Park.  It is a Renaissance structure with an unusual outdoor Renaissance pulpit adorned with reliefs from 1585 depicting Calvary and the Resurrection.

Statue of the Holy Family

Arnošt z Pardubic Square is home to the Baroque Statue of the Holy Family. The original Baroque statue was created by Jan Jiří Šlanzovský in 1722-23. It was the product of a commission by the local municipal council, and funded by the bequest of Terezie Tlapalová. In the 1990s, the crumbling statue underwent restoration, and was placed in the Podlipanyské Museum. It was replaced on the square by a copy by academic sculptor Váňa. 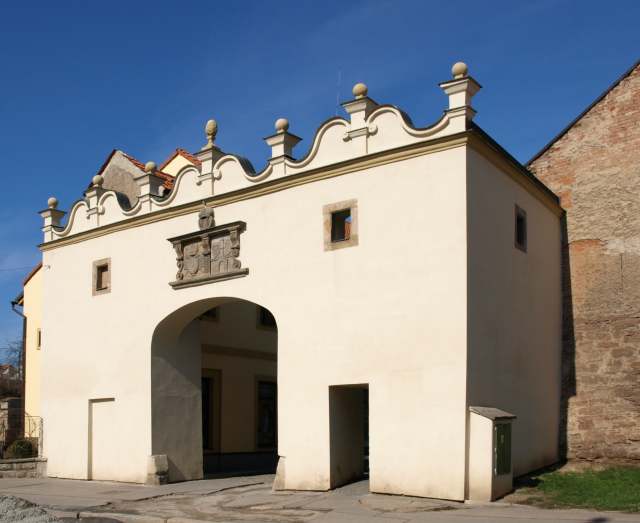 The wooden circular rampart surrounding Český Brod was replaced with a stone rampart in 1343-1364 through the support of Archbishop Arnošt of Pardubice. The new ramparts included three gates: Pražská, Kouřimská, and Liblická, as well as two portals: Žitomířksá and Podměstská. The structure was significantly damaged in the 30 Years War, and was repaired following 1656 in the Baroque style, supplemented by the construction of the fore-gate. The late-Baroque fore-gate of the Kouřimská gate that stands today originated in this period. The eastern facade is adorned with a panel of reliefs with the coats-of-arms of the Holy Roman Empire and the Royal City of Český Brod, above which sits a tablet with the monogram of Leopold I and a relief of the imperial crown.

According to a tile discovered with the insignia of the Archbishop Jan of Jenštejn, it is thought that the structure may date all the way back to the end of the 14th century, though it can safely be asserted to have been built by 1402, which makes it one of the oldest city halls of any Czech city. In 1547, it was reconstructed in the Renaissance style, and, following a great fire in the city in 1739, it was rebuilt in the Baroque style in 1741 - 1743. Beginning in the year 1800, a portion of the building housed a pharmacy, and during the reorganisation of the state judiciary in 1849, the city hall passed into the hands of the district courts. Several years later, the structure became the headquarters of the district office, and following the dissolution of the district in 1960, it has been used for cultural and educational purposes. In 1996, the old city hall was declared a cultural monument.

The Sokol Hall in Český Brod was built in 1884, based on the designs of local architect Jan Koula, who, together with his student, Josef Poselt, also participated in the artistic decoration. The Sokol Hall has an exquisite coffered ceiling and curtain by Jan Koula, and, following its inauguration in 1885, became the social and cultural centre of the city.

Memorial to Prokop the Great

The Art Nouveau memorial to Prokop the Great (Rasus) by sculptor Karel Opatrný from 1910. The memorial, which was set in the place of the former city fountain, represented the Taborite captain at a critical moment of the Battle at Lipany on 30 May 1434, and, decades later, still symbolises the national defeat at Lipany. Prokop the Great stands on a stylised hillock with his back to City Hall, wielding a Hussite mace, and gazing in the direction of Lipany. Behind him are symbols of military regalia of the time. 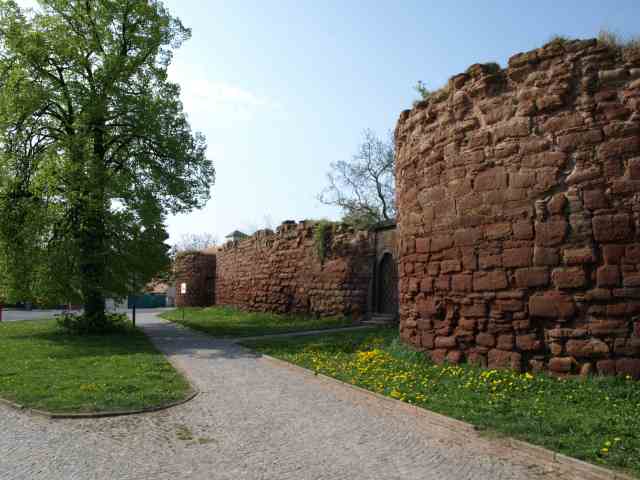 The stone fortification was built around 1360 to protect the citizens from enemy attack. Entry into the city could be gained through three gates, and a minimum of one portal. Parts of the outer walls still stand today, primarily on the southern, southeastern, and western sides of the core of the city. The fore-gate of the Kouřimská gate has also survived, with parts of the gate itself, and its eastern portal. The fortifications on the southeastern side have also survived, along with their bastions. The walls of the ramparts are built from large blocks of red Permian sandstone.

The museum was founded in 1896. It resides in a remarkable Art Nouveau building, constructed in 1927-1930, based on the designs of architect Antonín Balšánek, and is encircled by the original garden. The Museum is a dominant feature of the historical quarter of villas that spreads across the northwestern edge of the city. The Museum exhibits illustrate the historic Battle at Lipany (30/5/1434), the Slavic settlement at Pošembeří, and the intriguing collection of Oriental artifacts of world traveller Josef Zounek. Each year, the Museum also hosts several seasonal expositions and accompanying programmes.

This neo-Renaissance structure was built in 1897-98 based on the designs of architect Antonín Turek as a civic credit union. The civil credit union resided in a portion of the building up until the year 1948. The assembly hall and a number of the offices are decorated with paintings by academic painters Otakar Moravec and Jaromír Seidl.

The passenger railway building was built in 1928-29 based on the designs of Český Brod native architect František Koula in the geometric modernist style with elements of cubism. Its current appearance stems from the updates related to the electrification of the Česká Třebová - Prague line in the 1950s. At this time, the former heating plant was demolished, the tracks were repaired, and a platform with an underpass was built. In 2010, the structure was repaired by the current owner, ČD, a. s. (Czech Railways).